Last week, I attended a public conversation between Sam Harris, author and neuroscientist, and Greg Epstein, the Humanist Chaplain at Harvard University. Watch the highlights here and the full video here. Harris has recently come out with his new book, Waking Up, A Guide to Spirituality Without Religion (which I recommend) and most of the discussion examined themes central to the book.

“The center of the bull’s-eye for me,” Harris said, “is the phenomenon of self-transcendence — the fact that it’s possible to have an experience of consciousness free of the sense that you are a subject riding around inside your head as a passenger in the body… perceiving everything from a seeming point behind your eyes and feeling that you are an ‘experiencer’ in the middle of your experience, a ‘thinker’ in addition to the flow of thoughts, an ‘author’ of your thoughts, actions and your mind. And that point of view [the sense of being a self separate from the experience] — the one that everyone starts with — doesn’t survive scrutiny.” (brackets and italics mine)

In Waking Up, Harris compares the illusory sense of self – the one that we all operate under – to a kind of perceptual illusion, similar to visual illusions. He uses the following image as an example. Have a look and see how quickly you notice the white square. 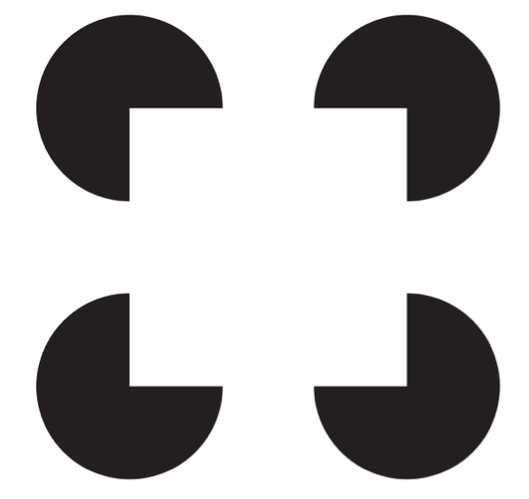 Harris writes: “It certainly looks like there is a white square in the center of the figure, but when we study the image, it becomes clear that there are only four partial circles. The square has been imposed by our visual system, whose edge detectors have been fooled. Can we know that the black shapes are more real than the white square? Yes, because the square doesn’t survive our efforts to locate it —it’s edges literally disappear. A little investigation and we see that its form has been merely implied.” – Sam Harris in Waking Up

The sense of self, the feeling of being a ‘me’, or an “I” within the flow of experience is no different.

In the Buddha’s language, these four partial circles are analogous to the khandas, or clinging aggregates, which I’ve written about here, here, here, here and here. They are the phenomena which generate the appearance and subjectivity of a self; but when closely examined, they reveal nothing in addition to their own process.

So, in your practice, I encourage you to really examine this. As you watch the breath, sensations, sounds, images, thoughts, moods, mind-states… is there anything that survives the scrutiny? 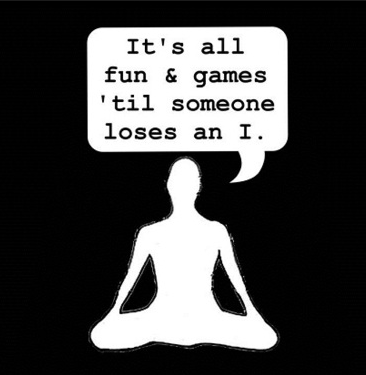