As we learned in the last lesson, one of the most common myths about Yin Yoga is that “alignment doesn’t matter.” Often, people unfamiliar with the practice notice that everyone in a Yin Yoga class doing the same pose with slightly different alignments and rush to conclude that “anything goes.” Or they take a Yin class and don’t hear the teacher give precise instructions on how to place the body and again conclude that the teacher doesn’t understand or care about alignment. Neither is true.

In Yin Yoga, as in all intelligent forms of physical yoga, alignment matters. But alignment in Yin Yoga has little to do with whether your foot is pointed in the “right” direction, or whether your knee is at a precise 90-degree angle. Focusing on how a pose looks is an approach referred to as aesthetic alignment. However, what is aesthetically pretty may not be functionally beneficial.

In Yin Yoga, the functional intention is the only reason to do the pose. It is tied to a pose’s target areas, the main areas of the body that the pose is intended to gently stress and the places where you want to feel mild-to-moderate sensation. Sometimes you will stress all the target areas, sometimes a few, or sometimes just one.

If you pursue aesthetic alignment in Dragon, also known as Anjaneyasana (Low Lunge), the intention is to align the body to “look” correct. Your front knee is directly ahead of its corresponding hip and directly over your front heel. Your front thigh is parallel to the long edges of the mat. Your hips are squared to the front of the mat. Your torso and arms stack over your hips.

Now, shifting to functional alignment, the intention is to align the body in a way that is functionally beneficial. Before you even get into the pose, ask yourself, “Why am I doing this pose?” Your alignment will be based on your intention, your target areas. Dragon has two target areas: The back leg’s hip flexors and the front leg’s outer hip, adductors, and inner hamstrings. Your alignment will also depend on the variation because Yin poses, such as Dragon, sometimes have many variations. Here, you’ll explore two different target areas of the pose.

[Refer to the image of me in the pose – but keep in mind that your alignment may not look like mine because each of our our bodies have unique shapes.]

Target Area: Hip Flexors of the Back Leg

I align my body in a way that increases hip extension of my back leg. To do that, I place one hand on my front thigh and the other hand on a block, raising my torso. That way, both my hips and spine extend more, which will likely increase the tensional stress on my back leg’s hip flexors. 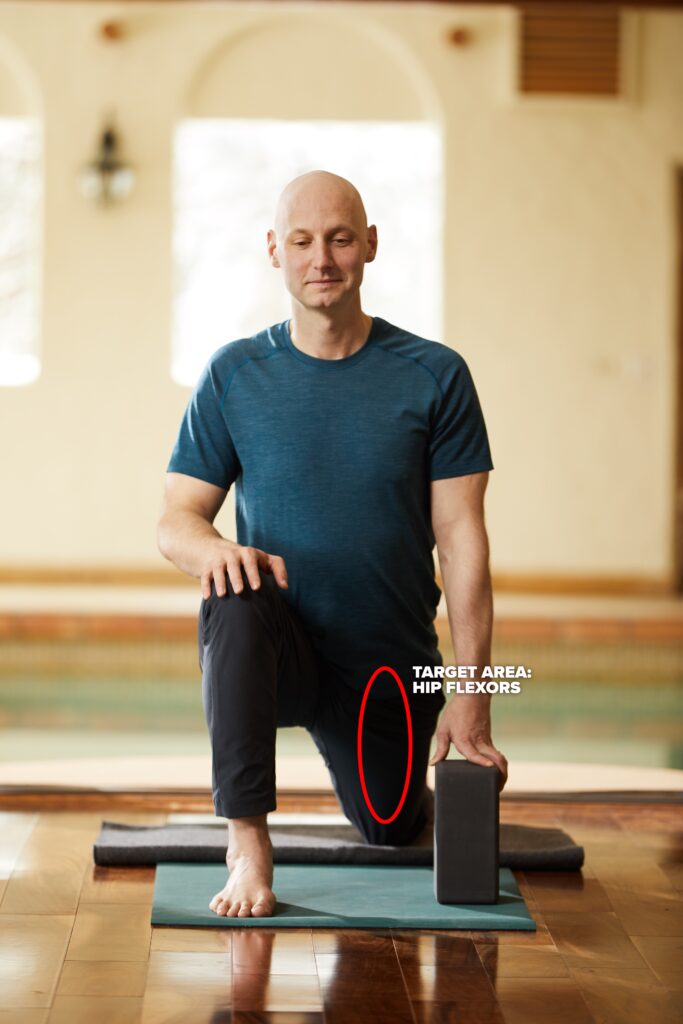 Once in position, I try to relax my hips down to the floor, softening the hip flexors to bring a gentle Yin stress to the dense connective tissue in that area. This works for me. It may not work for you; it may generate excessive stress on your hip flexors. Instead, placing your hands on the floor may be a better way to successfully target your hip flexors. Another alternative is to rest both hands on the front knee or simply to cross your forearms on your forward thigh. Remember your intention, and adjust accordingly.

Target Area: Adductors and Outer Hip of the Front Leg 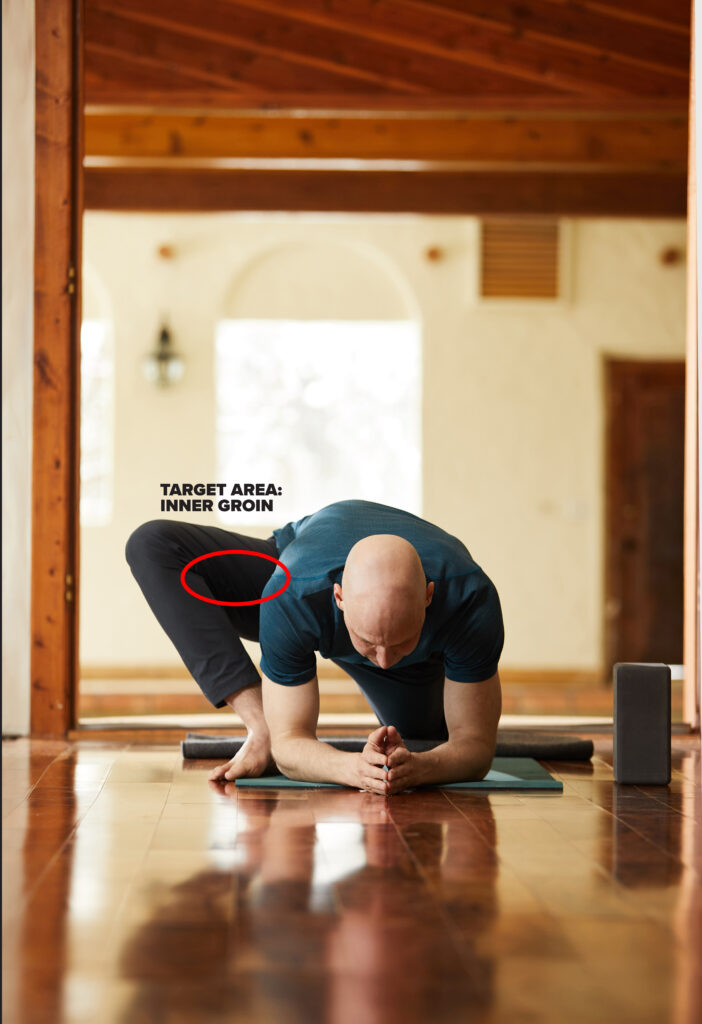 Once in position, I try to relax my front leg out to the side. Again, this works for me. It may not work for you though; it may create intense stress on your adductors. If that’s the case, bringing your forearms or your hands to blocks may create the mild-to-moderate sensation the pose intends to generate.

Yin Yoga is an ideal practice for focusing on functional alignment because you hold the poses for several minutes, giving you time to feel and observe the results of the alignment choices you make.

With that, I want to talk about compression in the next lesson in this series – particularly with regard to the spine. I intend to answer the common question: Is It Safe to Compress the Spine in a Yin Yoga Pose?