Recently, I introduced an essay series – this is the second installment – which will lay out a theoretical framework for how Yin Yoga can help support the harmonization of Qi from the perspective of Traditional Chinese Medicine. If you missed that first installment, at some point, consider catching up on that here.

To continue, I think it will be helpful to try and define what I mean by “harmonized Qi” before exploring how Yin Yoga can help support that experience. And as a way to better understand what “harmonized Qi” signifies, I’ll start with looking at what the character of Qi depicts. The character for Qi is a composite of two radicals: the top radical depicting “hot vapor, or steam,” and the bottom radical depicting “rice being cooked.” 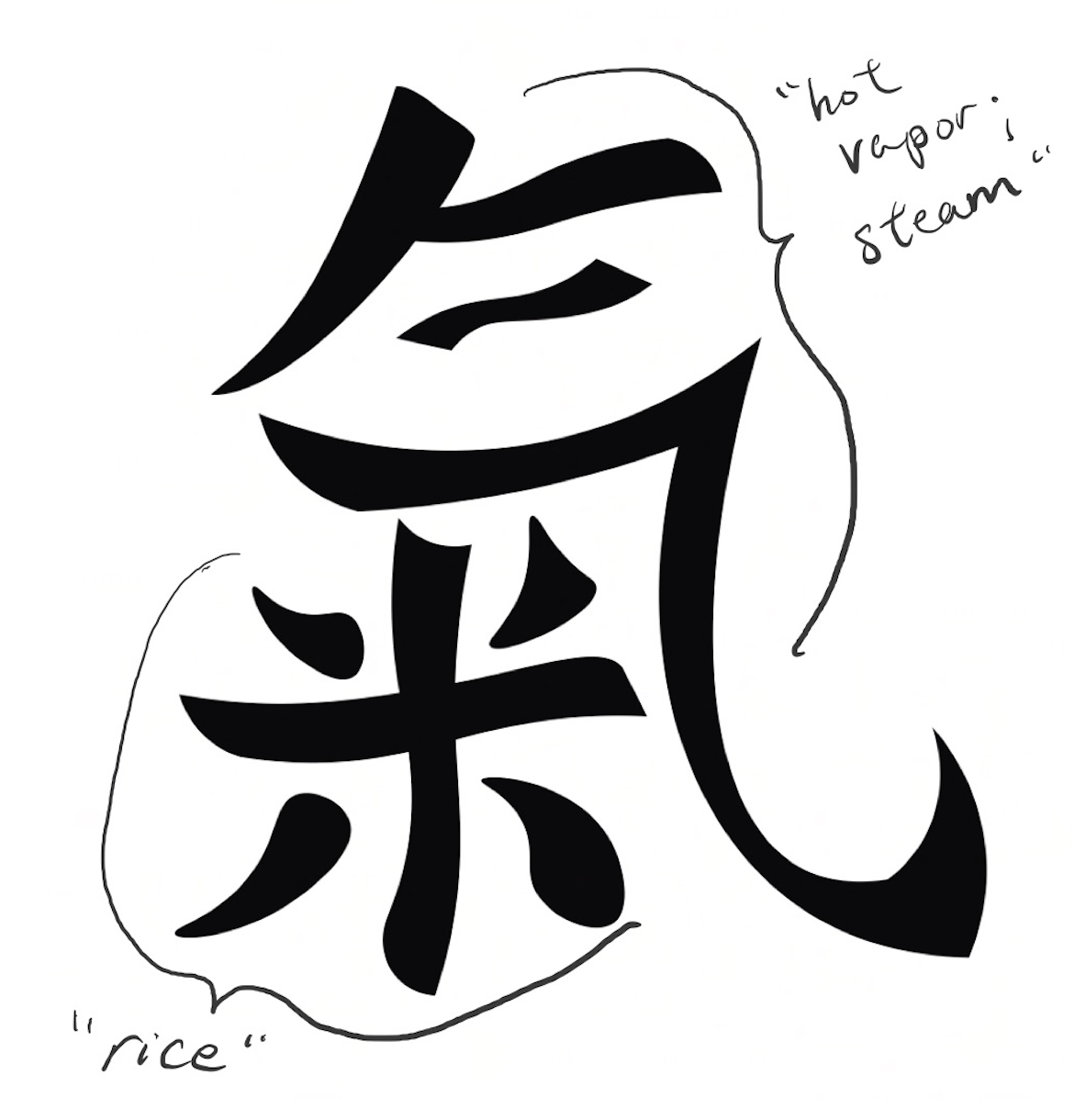 Limiting our discussion to human biology, the concept of Qi suggests the refined energy that is extracted from the “raw materials” of food, fluid and air. This refined energy – Qi – is what supports life and health.

I’d like to now give a brief overview of both the primary sources and functions of Qi, as I think this will help establish a good theoretical framework for understanding what Qi harmonization involves.

1.    Pre-Natal Qi: The Qi that we all begin our life with is the Qi we inherit from our parents, especially from our mothers (hence “Pre-Natal”). This Qi is the basis of one’s Kidney Qi, the Qi that provides the catalyzing force for all metabolic processes and the foundational blueprint for development and maturation.
2.     Post-Natal Qi: The Qi that we generate after we’re born is derived from the pure Qi we extract from food (Gu Qi) and the pure Qi we extract from air (Zong Qi). Together these two forms of energy become one’s “Qi in circulation,” and resemble a familiar equation of energy production in Western science (Keown, The Spark in the Machine):

Our ability to generate Qi involves transforming and extracting pure Qi from coarser raw materials, and that transformational function of Qi brings us to the various main functions of Qi. Through understanding the primary functions of Qi, I hope to ground a more specific sense of what constitutes Qi harmonization.

Primary Functions of Qi:
1.    Transforming: The first and foremost function of Qi is that it transforms “raw materials” (food and air) into rarefied and more powerful forms of Qi. In other words, we need Qi to generate Qi. Think of this function as being synonymous with “digestion.” If the digestive  function is weak, a whole host of digestive disorders like gas, bloating, reflux, borborygmus  – as well as generalized lassitude and fatigue – are common.
2.    Transporting: The second function of Qi is that it moves things around; it circulates the “stuff of life.” If this circulating function is impaired, it leads to the experience of Qi Stagnation. The obstructed, impeded flow of Qi can cause aches and pains on the physical level, and emotional stagnations on the energetic level.
3.    Holding and Raising: In addition to digesting and circulating energy, Qi  also has the function of “holding things in place.” This refers specifically to the role of “holding” or “wrapping” the Blood in the vessels. This sounds strange to Western ears, but if this function is impaired, ie. weak Qi can’t hold the Blood in the vessels, this can lead to excessive bleeding (menstrual, rectal, oral, nasal, subcutaneous). Similarly, the “raising” function refers to “keeping organs in place,” or preventing prolapse.
4.    Protecting: A specific form of Qi, called Defensive Qi (Wei Qi) protects the body from pathogens (ie. forms of energy that breed disharmony). This can be thought of as “Immune Qi.” If it’s strong, you’ll have robust health and immunity; if weak, you’ll have a tendency to catch frequent colds and easily become ill.
5.    Warming: As anyone who has practiced Qi Gong or Reiki will attest, Qi has a warming effect. This function manifests in keeping the body warm as well as in “warming” the Fire element for proper digestion.

From these functions, it follows that the signs of harmonious Qi include:
•    Good digestion with a sense of vibrant energy oriented towards meaningful activity
•    An embodied emotional environment of relaxed aliveness
•    Robust immunity towards physical and psycho-emotional pathogens
•    A generalized warmth of body, mind and heart

Let’s now return to the original question: Does Yin Yoga promote the harmonization of Qi (ie. the experiences listed above)? My answer is a definitive, Yes. And the next several installments will explore some of the various mechanisms by which I believe this to be true.

But I think it’s important to remember that the thing that makes Yin Yoga a yoga – the thing that distinguishes Yin Yoga from mechanical passive static stretching – is the entire variety of psycho-energetic-spiritual elements that the practitioner yokes within their practice whilst “holding a pose.”

As my early teacher, Sarah Powers, articulated so well: What we do with our body, how we emphasize and integrate the breath, how we cultivate intention and attention – all of these elements play into how Yin Yoga influences and harmonizes Qi. Going forward, I’ll explore each of these elements in greater focus, looking at how Yin Yoga harmonizes Qi in terms of its impact on tissues and fluids, energy, emotions, and consciousness.

May your Qi flow freely,
Josh