As an introduction to the practice of Yin Yoga, here is a high-level overview about what Yin Yoga is, how it differs from other styles of yoga, and some of the many benefits of a Yin Yoga practice.

What is Yin Yoga? And What Is Yin Yoga Not?

In essence, this approach to practice can be summarized by the statement: Bring your body into a posture where you feel modest levels of sensation, allow your muscles to relax within that experience, and remain relatively still for between 3 and 5 minutes. All those points need to be clarified and qualified (we’ll get into that later in this series), but that, in a nutshell, is the essence of the Yin Yoga practice. 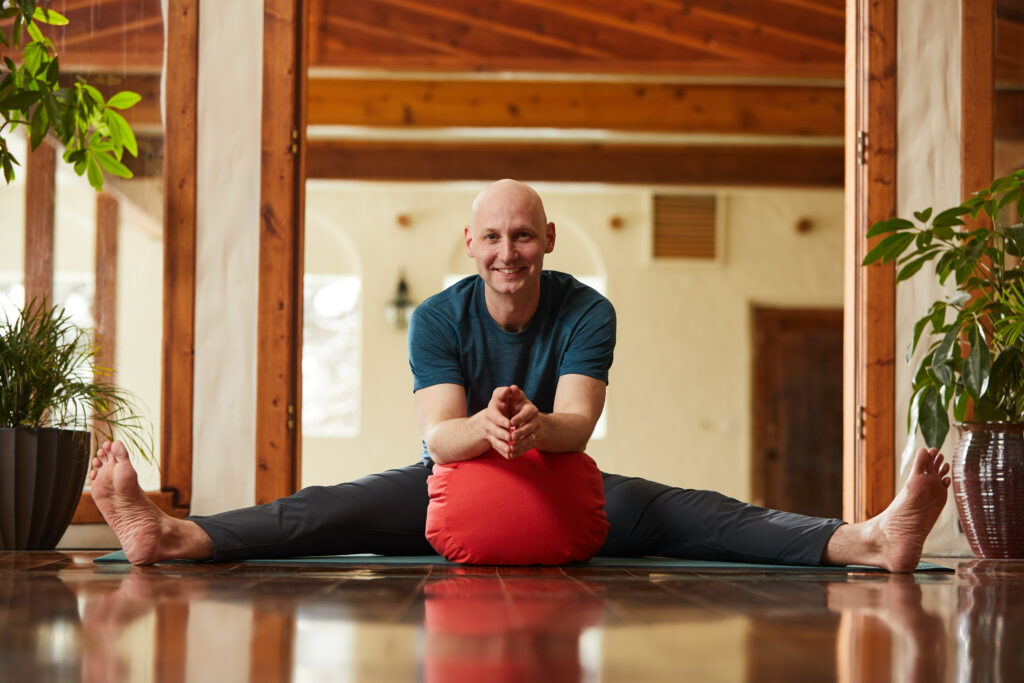 Yin vs. Yang: In Theory and Practice

To better understand the intentions of Yin Yoga, it’s helpful to have a basic understanding of Yin and Yang theory. The terms Yin and Yang come from the ancient philosophy of Taoism. The Taoists were keen observers of nature, and in their assessment of observing patterns of nature, they described the dynamics they observed in terms of oppositional and complementary relationships. In other words, every thing — both within itself and in relationship to other things — possesses both oppositional and complementary qualities.

For example, a tree possesses both upwardly and outwardly expanding branches as well as downwardly stabilizing roots. In this example, the branches would be considered “yang,” and the roots considered “yin.” But one does not exist without the other. Furthermore, we could then compare the tree to a cloud. In this relationship, because the tree is below the cloud and more material in nature, it might be classified as “yin” relative to the more dynamic, fluid, lighter nature of the cloud, which would be more “yang.” And yet, if we change the relationship and compare the tree to the earth, one could make the case that the tree is more yang in relationship to the yin-like nature of the earth. Nothing in this schemata is fixed or absolute.

Yin and yang are adjectives that describe aspects of a relationship. Nothing in the world is inherently yin or yang. Something receives the designator “yin” or “yang” only when it is being evaluated against something else. Moreover, with any sort of yin/yang analysis, there is also a specific characteristic or trait that is being evaluated, such as temperature, location, or capacity to move.

The Chinese character for “yin” literally describes the shady side of a hill. And the Chinese character for “yang” refers to the sunny side of a hill. Based on this description, there has been a general consensus within Taoist and Chinese medical theory, that “yin” phenomena tend to refer to things that are relatively cooler, moister, darker, downward, still, slow, and yielding. Similarly, the general consensus for “yang” phenomena refers to things that are relatively hotter, dryer, brighter, more upward, active, quick, and forceful. Please remember that these are not fixed, absolute traits. They are relative terms used to describe relationships.

For the purpose of understanding and analyzing yoga styles, Yin/Yang theory offers one lens for assisting that evaluation. Styles of yoga practice that tend to be slower, that emphasize stillness and receptivity – these styles would be classified as more yin in nature. Whereas styles that are more active, dynamic, and moving – these styles would be classified as more yang in nature. Notice that I used the word “styles.” Many styles of yoga could be classified as “yin” in relationship to more “yang” styles. Restorative yoga, Yoga Nidra, Raja Yoga, and Yin Yoga are all relatively more “yin” in nature compared to Iyengar Yoga, Ashtanga Yoga, Bikram Yoga, and Vinyasa Yoga, which are more dynamic and “yang” in nature. But again, these terms yin and yang are descriptive and relative, not absolute.

Now, as a style of “yin” yoga, Yin Yoga (the specific style) is intended to balance and harmonize the body and mind in tandem with other more “yang” styles of practice. Generally speaking, “yang” styles of yoga emphasize rhythmic and repetitive contraction of muscles, moving the body through dynamic flows which stimulate, stretch, and strengthen the muscles, or “yang” tissue of the body. Yin Yoga, as a style, emphasizes passive, static postures, held with the muscles are relaxed, so that dense connective tissues around the muscles and joints can be stimulated, somewhat stretched, and strengthened. Together, Yin and Yang yoga offer complementary, mutually beneficial strategies for maintaining optimal health of our bodies and minds.

But, in recent decades, modern yogis have largely neglected training and developing the Yin aspect of their yoga practice. As such, many modern yogis are missing out on the “other half” of practice, namely the Yin dimension of yoga.

The Benefits of Yin Yoga

Later in this series, I will explore the myriad benefits of Yin Yoga in much greater detail, but in this introduction to Yin Yoga, I’d like to set the stage for you.

On a physical level, Yin Yoga targets layers of tissues in the body largely neglected in yang yoga. Specifically, dense connective tissues around our muscles and in and around our joints are gently and safely stimulated by an intelligent practice of Yin Yoga. This Yin stimulation of dense connective tissue promotes this tissue’s strength, vitality, hydration, and resilience.

But on the energetic level, many researchers in the field of energy medicine theorize that the connective tissue is the biological substratum for the network of energetic communication in the body. In general, the practice of Yin Yoga is one way of promoting greater energetic flow and enhanced energetic circulation. In Yin Yoga, deep energetic stagnation can be unblocked, particularly in the joints, and the ensuing response is one of calm and stillness as one’s energy circulates with unimpeded ease.

And mentally, the Yin Yoga practice offers the opportunity to cultivate “yin” capacities of mind. In yang styles of yoga and meditation, we’re often told to direct our attention to sensation in our body, or focus on our breath, or to not let ourselves be swept away by thoughts. As instructions, these are all well and good, but they represent “yang” capacities of control, management, and attempts to optimize experience. On the other hand, one could intentionally seek to cultivate “yin” capacities of mind. Capacities such as receptivity, quiescence, and allowance. And the approach to developing theses qualities of mind is quite different from more classical “yang” forms of meditation.

Please remember, there is no hierarchy. The primary intention of the intelligent yogi is to be mindful of their body and mind dynamics and attempt to promote harmony and balance. For one practitioner, a more “yang” approach will support greater balance. For another, a more “yin” approach promotes greater balance. And, as we’ll see, in different seasons, or with different life circumstances, a judicious application of different styles will be required.

With the understanding that Yin Yoga is a complementary way of training the body and mind, the next segment will look at the potential results of a consistent practice – 6 positive effects in particular.