When I first stepped onto my yogic path 20 years ago, I was quickly hooked by the rigorous discipline and self-control that Iyengar Yoga inspired in me. For two hours a day, I practiced asana sequences as scripted by B.K.S. Iyengar in Light on Yoga. I sought spiritual purity through a raw vegan diet, believing it was the only way to uplift my soul and purge my body of toxins. And I believed that with the right conditions, the right teacher, and the right amount of practice, liberation was achievable.

It’s clear to me now that my sincere effort to find peace and happiness through yoga was turning me into a neurotic freakshow. In fact, the Iyengar method’s emphasis on exactitude had prompted controlling tendencies in me that started to colonize my entire life. It wasn’t until I found myself in acupuncture to treat a back strain – from practicing Urdhva Dhanurasana (Wheel Pose) – that I got the first hints that my best yogic intentions may have been doing more harm than good. Acupuncture was so fascinating to me that I decided to become an acupuncturist. And it was during my first year in acupuncture school, when we explored the fundamentals of yin-yang theory, that it occurred to me just how yang-dominant I had become.

Yin-yang theory, from traditional Chinese medicine, is a simple but useful way to analyze and understand any experience. Yin qualities include traits like receptivity, allowance, tolerance, reflection, and passivity. Yang qualities include doing, directing, improving, achieving, controlling, and becoming. From a Chinese-medicine perspective, yin and yang qualities are both essential, and neither is superior to the other. When we understand their relationship, we can promote balance and harmony between them.

It turns out that in my yang-driven effort to cultivate peace, I was reinforcing a quality of rigidity by trying to control my body and diet. I started practicing Yin Yoga to find more balance, and I immediately noticed some big changes. First, my experience with meditation dramatically improved. My body started releasing deep tension that had been causing my knees to ache and my feet to go numb. This alone kept me coming back to the five-minute Yin Yoga holds that are standard for the style, and I learned to tolerate the bitter achiness of the sensations I felt when I did the poses. I also noticed how this release of tension facilitated a more graceful flow and better mobility in my yang-dominant Iyengar practice. 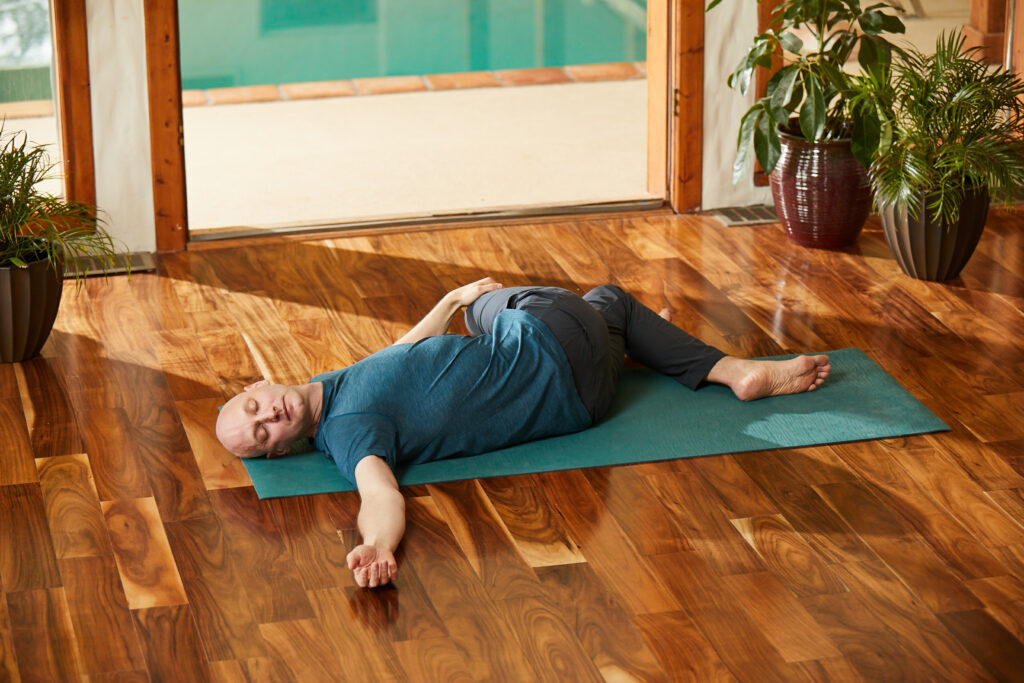 I began to perceive an inner softness and deep relaxation in my body that lasted far beyond the normal 30 minutes of zen I experienced after a yang practice. Perhaps most profound, I had a greater awareness of my internal energetic state. In acupuncture school, people often talked about feeling their energy as flowing or being blocked – but to me, perceiving subtle energy was as “out there” as seeing auras or remembering past lives. But when I started practicing Yin Yoga, I finally began to sense the subtle currents of energetic flow that rippled through my body. Turns out it wasn’t so mysterious; it just required a more magnified lens of mindfulness, which is something that naturally gets stronger when you practice Yin Yoga.

The term Yin Yoga gets tossed around a lot these days, yet as a yoga style, it’s intended to achieve something very specific: To balance and harmonize the body and mind in tandem with other, more yang styles of practice. Generally speaking, yang styles of yoga (like Iyengar, Ashtanga, and vinyasa) emphasize rhythmic and repetitive contraction of muscles. These styles focus on moving the body through dynamic flows that stimulate, stretch, and strengthen the muscles and their fascia (connective tissues). Yin Yoga emphasizes passive, static postures, held for long periods of time, with muscles in a relaxed state. This way, the dense connective tissues in and around the muscles and joints are stimulated, somewhat stretched, and ultimately strengthened. Yin Yoga is meant to complement and supplement one’s yang yoga practice. Yin Yoga isn’t a standalone practice; it’s just the “other half” of practice.

At first, Yin Yoga may feel counterintuitive. For example, after you allow your body to “soak” in the mild stress of a Yin Yoga posture, you will likely feel a noticeable fragility in that area upon coming out of the pose. Rather than feeling wonderful, you may feel stiff – almost as if you’ve aged a decade or two. How can something that looks like it should feel so good feel so uncomfortable – at least at first? It’ s due to something I call instantaneous tissue soreness. Think about it this way: The immediate aftermath of any good exercise, which involves taxing your muscles, is temporary weakness in those muscle tissues. But with time to rest and recover, the body responds to that exercise by reinforcing the stressed tissue, making it stronger and healthier. This is what happens during Yin Yoga, and it is the main difference between Yin Yoga and restorative yoga. Where Yin aims to put specific kinds of stress on the tissues to promote strength, hydration, and mobility, restorative yoga seeks to prop the body in such a way that a deep relaxation can occur without stressing the body in any significant way. Two different intentions, two different experiences.

The Science Behind Yin Yoga

To more fully understand why Yin Yoga works and how the muscles, ligaments, and fascia are stressed during Yin Yoga postures, it’s helpful to look at the pioneering research of Helene Langevin, MD, PhD, director of the Osher Center for Integrative Medicine in Boston. Langevin is a medical doctor and an acupuncturist who has studied the mechanisms of acupuncture and what happens to our tissues when they receive a gentle stretch over several minutes.

Dr. Langevin’s research shows that when an acupuncture needle is inserted into a point and rapidly twisted back and forth, the collagen fibers of the loose connective tissues wrap around the needle “like spaghetti around a fork,” she says. That winding of the collagen around the needle generates a micro-stretch in the connective tissues that lasts as long as the needle is left in place. After 30 minutes of this needle-induced stretch (which is often accompanied by a dull, achy feeling), the cells in the nearby tissues respond by releasing certain pain-relieving molecules.

Dr. Langevin was able to replicate this effect – without using needles – by using a gentle, manual stretching technique for 30 minutes, very similar to how we approach stretching our bodies in Yin Yoga. Of course, you likely won’t stay in a Yin Yoga pose for 30 whole minutes. Yet within a Yin sequence, the cumulative gentle-stretching time an area of your body receives may start to approach the 30-minute mark, enabling you to experience the same kind of benefits.

Dr. Langevin’s research has shown that long, gentle stretches (10 minutes, twice a day), can lead to decreased inflammation and restoration of healthy mobility in connective tissues. And another study, conducted by Robert Schleip, PhD (who has dedicated his life to studying fascia) showed that when connective tissues are gently stretched for 15 minutes, they become more hydrated 30 minutes after the release of the stretch than they were before the stretch took place.

Together, these studies suggest that on a physical level, Yin Yoga helps promote the strength, vitality, hydration, and mobility of our connective tissues. Yet Yin Yoga works on an energetic level, too. To wit: Dr. Langevin found a correlation between the location of traditional acupuncture points and planes of intermuscular connective tissues. As an acupuncturist myself, this makes sense to me. Often, traditional acupuncture texts describe the location of points as being found in the space between two muscles, between a muscle and bone, or between two bones. What’s between these things? Connective tissues, which are also home to the meridians, or lines of subtle body energy, in Chinese medicine. As a result, Yin Yoga is one way of promoting greater energetic flow and enhanced energetic circulation. With both acupuncture and Yin Yoga, deep energetic “stagnations” are unblocked, particularly at the joints. When one’s energy circulates with unimpeded ease, the ensuing response is one of calmness and contentment. This may be one reason why many Yin yogis report feeling a deep parasympathetic (rest and digest) nervous-system response after the practice, marked by a lasting feeling of relaxation.

This concludes the introductory series on Yin Yoga. If you’d like to go deeper, I encourage you to sign up for my Foundations Module, where we do an in-depth and interactive investigation of Yin Yoga postures, engage in lively group discussions on theory and application, with solid practice time to fully integrate each day’s lessons. 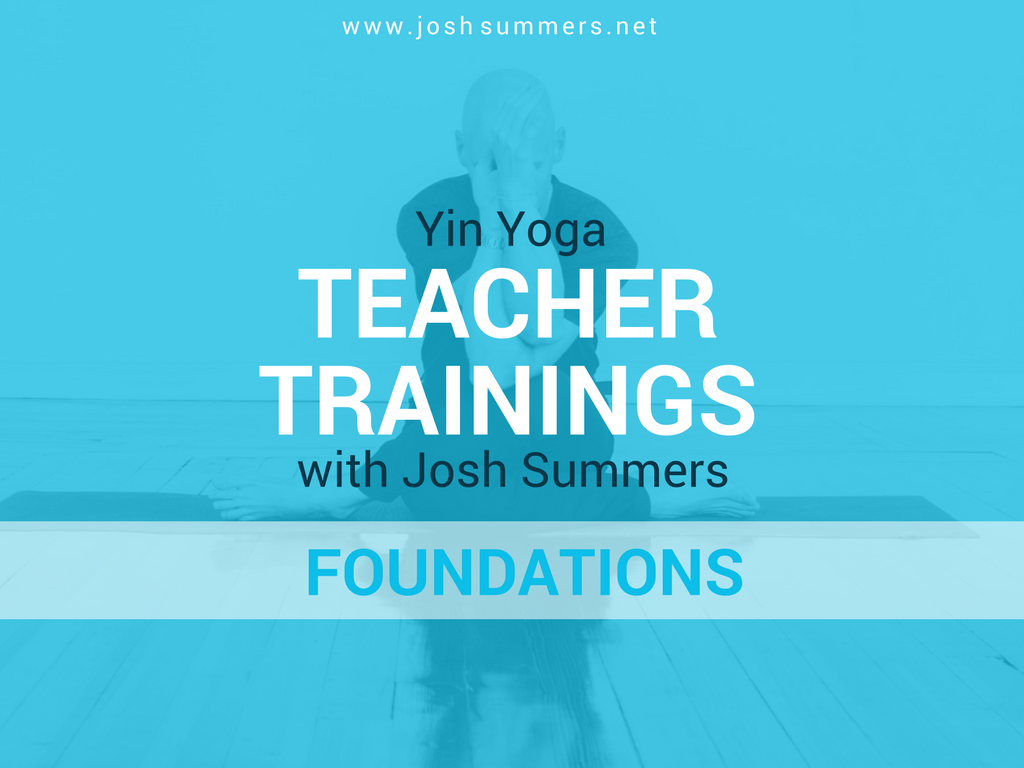 Here you’ll find an overview of the program, what past students have said about it, and the complete list of upcoming dates.

The Foundations Module covers everything you need to know to confidently and effectively teach and practice Yin Yoga.

Well, I hope that you’ve enjoyed this series – and that I’ll see you at an upcoming training. Please reach out if you have any questions at all about the program. 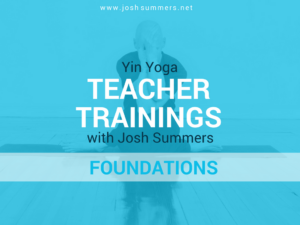 If you’d like to study Yin Yoga more deeply, I invite you to join me in an upcoming training. The Foundations Module is the perfect place to start – it covers everything you need to know to confidently and effectively teach and practice Yin Yoga.

More Posts from This Series 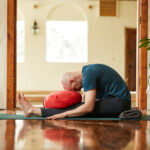 I want to give you a clear understanding of the first of Four Principles of Yin Yoga: "Coming into a Posture and Playing the Edge." In discussing this principle, I'll be exploring … END_OF_DOCUMENT_TOKEN_TO_BE_REPLACED 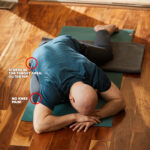 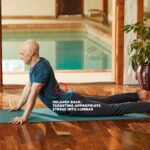 Have you noticed that the names of Yin Yoga poses are different than what you've heard in other yoga classes? Or have you wondered why Yin poses aren't named in Sanskrit? Hatha … END_OF_DOCUMENT_TOKEN_TO_BE_REPLACED

Testimonials from Attendees of the Foundations Module:

This is by far THE BEST yoga training course I’ve ever taken. Josh is a joy to work with. He is a fount of knowledge with NO ego! A rare combination. I was able to implement my new knowledge immediately upon returning to teaching.

I am really happy I decided to re-take Josh’s Foundations Module. It’s an in-depth and comprehensive look into the physical aspects, mechanics, and benefits of the yin yoga practice and I believe it will enhance my teaching immensely.

Josh’s class changed how I approached my practice. Yes, Josh teaches the poses. But more importantly, he invites his students to think about their Yin practice more intelligently, pragmatically, approachably and yes… more healthfully. It was good, good stuff.

Josh Summers has a wonderful teaching methodology and personality. I learned so much more than I ever expected. Josh truly has a gift for presentation and I highly recommend his school and training.

Josh is an accomplished facilitator and trainer, deftly navigating group dynamics and complex topics. The format of the in-person training is genius. The informative online course ensured that we all had a basic understanding of the material, so we could dive deeper into the material. I rate this course 10+ out of 10.

Josh has a winning combination of clarity, knowledge, humility, and humour and a relaxed passion for what he does which he transmits so well. I began as a Yin Yoga ignoramus and return home with a real sense of its magic.